Opal is one of the most stunning gems in the world. There are always far more opals than can be found on the surface. They come in stunning colors and attractive patterns. They look great in earrings, rings, pendants, watches, brooches, etc. Opals are exclusive, but have you ever wondered what an opal is? Or have you ever wanted where the Opal is, how it is formed, the history of the Opal, the amazing metaphysical benefits, the real connections, the facts about the birthstone. Now you can easily find jewelry having these amazing stones from Angel Alchemy Jewelry.

Opal is a stunning and mysterious stone, and its origin is still widely debated in the jewelry industry! Here is some fantastic feature you may not know about this iridescent gem. 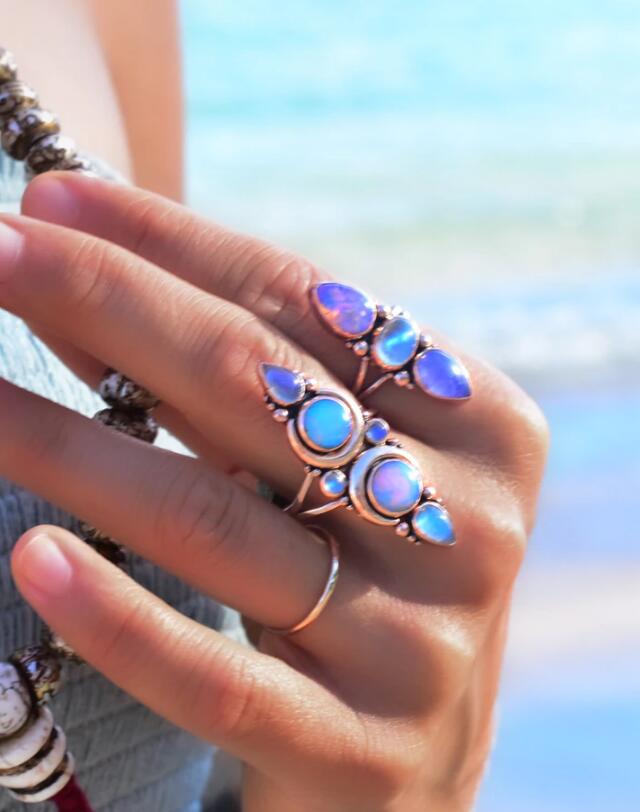 Opal is formed after heavy rain hits the arid ground. Silica-rich rainwater penetrates cracks in dry soil, leaving silica as the water evaporates. That is why Opal is so common in host rock seams and small spaces, as the composition of Opal contains up to 20% water.

Virgin Rainbow is one of the oldest and most luxurious opals globally. It luminosities in the dark. As the Opal’s surroundings darken, the Opal looks more vibrant than ever. Worth over $ 1 million, purchased from the South Australian Museum in Adelaide.

The national gemstone of Australia

About 95% of the Opal on the planet comes from Australia, and Aborigines have long claimed that the precious Opal’s vibrant colors come from the roots of the rainbow, which brought harmony to our creator’s feet touching the earth. By the way, the incredible chromatic display of the precious opals is due to the millions of tiny silica spheres that refract light and produce spectral colors. These spheres must have uniform properties and the right size to generate enough color for our eyes to process.

In the Middle Ages, opal was considered good luck

Opal is believed to bring good luck, good health, and good luck to the wearer in the middle ages. Stones are connected with purity and emotion. As many trusts, it enhances and reflects the wearer’s emotions. Opal is thought to promote creativity because it promotes interest in art. In the New Age Circle, it is considered a healing stone that treats fever and infections, purifies blood, and regulates insulin.

Opal did not gain an auspicious reputation after the publication of Sir Walter Scott’s Anne of Geierstein in 1829. Baroness Arnheim wears an opal amulet with supernatural powers in Scott’s novel. When holy water drops on the amulet, the Opal changes into a colorless stone, and the baroness soon dies. Due to the fame of Scott’s novel, people have begun to associate the Opal with fate and death. In the year following the publication of Scott’s novel in April 1829, opal sales in Europe fell by 50% and remained low for the next 20 years or so.

In 1912, Opal became the official birthstone for October. At that time, the National Gem Association met to end a long-term debate about which gems they represent each month. Opal has been a clear winner in October since the 15th century.

Throughout history, many cultures have associated various gems with astrology. Opal is usually associated with Scorpio and Libra. This coincides with October.

Opal is considered an alternative to the official 14th wedding anniversary gemstone gift.

The Queen Of Gemstones

The ancient Romans considered it a sign of hopefulness and blessing. Roman scholars in 75 AD summarize our beautiful opals, “Some opals have a drama comparable to the painter’s most profound and richest colors. Other opals have the fire of burning sulfur and even the brilliance of burning oil. Simulate. He was surprised to find that the kaleidoscope of gems contained ruby red, emerald green, topaz yellow, sapphire blue, and amethyst purple. That is why opals are often called the queen of gems.

Last but not least!

It was impossible to fulfill this list without mentioning the discovery of opals on Mars! Studies of the Martian landscape have shown the occurrence of deposits of hydrated silica, a substance we call Opal on Earth. One of the most important scientific discoveries of recent years, this discovery is one of the signs that scientists have come to believe that there is or was previously water on the red planet.

Different Ways to Use Your Straightener

How and When to Wear a Turban